If you have ever thought about being a landlord, you probably have a images of clogged toilets and problem tenants.   Having been a landlord for several years I’ve managed to collect a few tenant horror stories of my own, as well as from some of my friends who are landlords.

These tenant horror stories might change your mind about being a landlord… if they weren’t so unbelievable.   Some of them are scary, most are just downright funny.

I have a friend Steve, who  managed a group a Section 8 multi family units in Richmond, CA for several years.  He’s had to evict several problem tenants.  However, none come close to the tenant who accidentally fired off a shotgun into the downstairs unit through the floor from an upstairs unit.

Steve received a panicked phone call from the tenant downstairs who had small children.  Since none of the tenants trusted the police, they called the landlord whenever they had an issue.  You can only imagine the thoughts going through Steve’s mind as he knocked on the door of the tenant.  How do you tell a tenant with a shotgun he has to be out in 7 days? 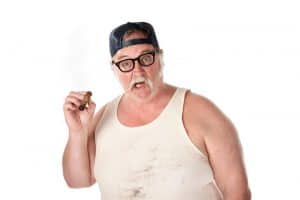 Steve bought another property in Modesto California. This property needed quite a bit of work and he was referred to a handyman who was willing to trade work for rent.  Steve is  one who likes a good deal and barters quite a bit.  He agreed to let the handyman move in and to trade a portion of the rent for the tenant’s labor.

Anytime the tenant needed to purchase materials for the project, the local big box hardware store would call Steve up for his credit card number and approval.  However, not long after the work started, Steve got a call from the local big box hardware store.  They told him that the handyman seemed to be buying an excessive amount of material.  To make things worse, the tenant’s kids would come back into the store with some of the materials asking for a cash refund.

Soon, the tenant’s work progress slowed to a complete stop and the tenant had to be asked to leave.  Of course the tenant refused so it went to eviction court.  THere the tenant claimed Steve was the absolute scum-lord, renting out a home without a kitchen. The conversation in court goes kind of like this:

Judge to the tenant:  “Did you have a lease?”

Judge to the tenant:  “Did you ever sign anything?”

At this point, the eviction attorney hands a copy of lease to the bailiff who hands it to the judge.

Judge to the tenant: “Is this your signature?”

Tenant:  “Yes, but the house doesn’t have a kitchen”.

Eviction attorney: “Your honor, it’s our belief that the property had a kitchen when the tenant moved in.”

Judge to the tenant:  “Was there a kitchen in the house when you moved it?”

At this point, Steve’s attorney turns to Steve and says, “All your life as an attorney you wait for a Perry Mason moment.  This is it.”

The judge evicted the tenant.

The house had an un-permitted garage conversion. But the tenant had been using this space for many years without complaint.  The tenant turned the landlord in to Code Enforcement for the illegal garage conversion and stopped paying rent claiming the home was un inhabitable.  Code enforcement red tagged the home, and the owner was given 10 days by the city to hire an engineer to draft plans to correct the problem.  The city then required the owner to have a contractor bring it up to code.  That’s when the owner called me to sell me the house. 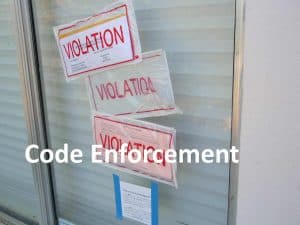 Another friend John bought a house at a foreclosure auction with tenants in place.  That afternoon, he went to visit to the house and to let the tenants know about the change in ownership.  With the visit, John gave the tenants a 60 day notice to move out.

Early the next morning John gets a frantic call from his contractor saying “John, turn on your television.”  The house he had purchased the day before, was the lead story in the morning news.  There had been a house fire the previous night.  Fortunately, the fire department managed to put out the fire without too much damage.  However, the very next night, the house mysteriously catches fire again, only this time everything is destroyed.  Coincidence?  I think not.

Call the police on your problem tenant?  Not when the tenant is a cop

Another friend of mine (he’d prefer that I not give his name) was offered above market rents by a local police officer.  The tenant paid on time and never asked for any repairs.  Great tenant right?  Peaceful, law abiding citizen.  The tenant rented the house from my friend for 10 years.  During the entire time the house was rented, my friend never had a reason go inside the house.

He’d call and ask to do a yearly inspection, but the tenant always had some excuse why they couldn’t.  The landlord would drive by the house and everything seemed good.  The yard was mowed and green.  All was good.

But it gets worse.  He hauled multiple 20 yard dumpsters of trash out of the backyard.  Apparently, the neighbors had told the tenant that they didn’t want to see his trash over the top of his 6′ high fence.  The tenant had then climbed on top of the trash and stomped it down, making it impossible to see by my friend just driving by.

Maybe he should have returned it all to the tenant like this landlord did.

A rental property in the neighborhood had been rented to a bunch of guys from the local college football and golf teams.  These young men held loud, wild parties and had drunk college kids urinating in everyone’s yards.  The landlord talked to the parents and to the cops to no avail.  Finally, the landlord called the coach at the college they attended and explained the situation.

A funny thing happened.  Their coach showed up at the landlord’s rental property and laid into these young men.  The landlord never had another problem with those tenants.  Apparently their coach made them run extra laps at practice several times until they got the point.  What?  Golfers run laps?

Every landlord who’s been in been in business any length of time has a cat story to tell. I personally like Jimmy Moncrief’s story of the crazy cat lady.  Jimmy says he rented a house to a woman with a cat.  Everything went fine for the first several months.  About month number seven, he didn’t receive any rent.  After contacting tenant to find out why she hadn’t paid her rent, he discovered that she had moved out of state, and left everything.  Including her cat.  As he says, “How long had the cat been in the unit?” – for several months, but he found the cat alive.  I don’t even want to think about how the house smelled.

From chicken soup to chicken poop

A friend of mine lived across the street from a house that had been rented to a family who had just moved to the US.  Since the landlord was from out of town, he never visited the property to check on the house, or his tenants.  After the family moved out, the landlord came to inspect the property.  The landlord walked across the street to my friend and told him, “You’ve got to see this”.  Upon entering the kitchen, my friend found every cabinet door missing and each cabinet filled with hay.  The kitchen cabinets had been turned into nests for the tenants’ chickens.  I guess someone forgot to tell these tenants that the cabinets were for storing their cans of chicken soup, not chicken poop.

Have your own tenant horror story?  Share them with us.