If you are a new home buyer shopping for a house, you’ve probably heard someone say, “Marry the house, and date the rate”.  This catchy phrase has become very popular since the Spring of 2022 when mortgage rates increased to 20 year highs.

The phrase “Marry the house, and date the rate” simply means you’re committing to a long term relationship with the house you love.  But you can dump the interest rate when you refinance.  The idea is that when you find the house you love, you buy it, with the anticipation that you will be able to refinance later when rates drop. 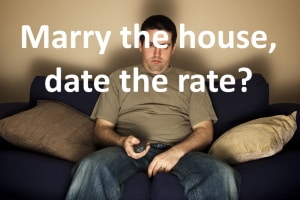 Typically the people promoting this phrase are unprofessional real estate agents and lenders who obviously have a vested interest in your buying a house or their making you a loan.  It’s just one of the crazy things some agents will say to sell a house.

But is this a good idea?  In this article we look take at the risks and costs of marrying the house, and dating the rate.

If you are a first time home buyer, it’s likely you have only known interest rates below 5% most of your adult life.  That’s because since the Great Recession in 2008, the Federal Reserve has been encouraging low interest rates to stimulate the economy.

They have done that by making money cheap to borrow.  Unfortunately, this resulted in significant inflation.  The cheaper it is to borrow money, the more money that people spend.  The more people spend, the more they’re willing or forced to pay for goods. If the pattern goes on too long, the result is inflation.

Inflation is part of the reason why home prices are so high.  It’s not just your grocery bill that has increased over the past several years, it’s also home prices.

How soon will interest rates go down?

So, when will interest rates go down?  When answering this question, it’s helpful to look at the history of mortgage rates and inflation at the same time.

In 1980 inflation had become a run away freight train.  To control it, the Federal Reserve raised interest rates to over 15%.  It took until 1989, and two recessions, before interest rates dropped back down to 9%, a full 10 years.

Sometimes, interest rates drop much faster.  It took just under 18 months for interest rates to drop from 8.09% in June of 2000 to 6.56% in November of the following year.  This was primarily because inflation dropped from 3.7% to 1.9% during this same period.

So, will interest rates drop anytime soon?  That is obviously an unknown.  If history is any indicator, inflation will have to drop below the Federal Reserve’s goal of 2% before they lower interest rates significantly.  Especially, if we’re hoping for interest rates to be as low as they have been for the past 20 years.

How soon after purchasing a home can I refinance?

Assuming you don’t have a prepayment clause in your mortgage, you can refinance anytime after your purchase.  However, refinancing your mortgage can be expensive.  Refinancing a home loan costs around 3.5%.  So, for a $500,000 loan it will cost you $17,000 between points and fees.

If you were to refinance from a 7% loan to a 6% loan, it would save you $417 a month in interest.  That’s a significant monthly savings for most households.  However, it would take you three and half years ($17,000 refi costs /417 savings = 42 months) before your savings would pay the refinance costs.

Lets assume you are able to refinance to a lower interest rate in three years.  That means you are in your home for almost 7 years (three years plus 42 months) before you break even on your refinance.

How much do rates need to drop before I refinance?

The general rule of thumb is you want at least a one percent lower interest rate before refinancing.  Of course, the greater the interest rate drop, the shorter the time it takes to break even on your refinancing costs.

Is it worth it?

It depends on how long you realistically plan on living in the home.  On average, the typical homeowner buys a different home after just 10-13 years according to the National Association of Realtors.  If you’re planning on owning your home for only the short term, then it may not be practical.

Assumptions by advocates of “Marry the home, date the rate”

There are several assumptions made by advocates of “Marry the home, date the rate”.

This is generally true, especially with inflation.  However, most periods of high inflation have also endured recessions as an over reaction to the Fed raising interest rates.  If you look back at the previous graph, you’ll notice there are several vertical grey bars.  Each of these bars represent a recession during that period.  In the period from 1979 to 1984 the Fed created two recessions in order to tame inflation.   The result was unemployment rose to over 10% in 1982.

If you’re counting on your home appreciating, you also have to count on two important factors.  The first is that you won’t have to sell your home during a recession for less money than you paid.  The second is that you will still be able to refinance when loans are often more difficult to qualify for.

Lastly, while your home may be appreciating, that won’t make your monthly payment anymore affordable.  But you may be able to refinance to a slightly better rate or eliminate your Private Mortgage Insurance if you have more equity.

You will always have the same ability to refinance

The last assumption made by proponents of “Marry the house, date the rate” is that you will have the ability to refinance.  While it is probably true, that you can refinance later, this is not a given.   Jobs change, family situations change.  If your financial situation were to significantly change, you might find yourself needing to divorce your house instead of refinancing.

If buying your dream home means paying a higher interest rate, then buy your dream home, but only if you aren’t planning on refinancing to make the costs work.  If you cannot afford the home at the higher interest rates and need to refinance, then buy a less expensive home, or save up more money for a down payment.  Don’t risk your financial future on faulty assumptions of interest rates going down soon or of your home’s value appreciating.  All of these assumptions can lead to foreclosure if your financial situation changes.