Home » Sacramento Real Estate Blog » Want to be a House Flipper? – Caution Ahead

Everyone Wants to Flip Houses

It seems like there isn’t a week goes by that I don’t hear about some person quitting their job or wanting to become a house flipper.  They have seen some TV show about house flipping and ask me if I watch that show.  Often it is followed by their asking me to teach them how to do house flipping because they know that I buy houses.  Nowadays, it seems like everyone wants to become a house flipper!  I heard about two more just this past weekend.  I try to be polite and not ask important questions that they should be asking. Do they have any construction experience?  Do they know how to estimate repairs accurately?  Have they considered the liability they are assuming?  These are just a few of the questions that go through my mind.

I don’t know about you, but this is starting to look a lot like 2004-2006. During that cycle, there was a real estate seminar every weekend in Sacramento hotels pitching how much money you could make.  People were lining up  at the back tables to buy the “secret sauce” to make their fortunes in real estate.  Many, borrowed money against their personal residences and then bought investment properties.  Then, when the market turned, they lost everything for foreclosure, including the homes they lived in.  I can’t even begin to count the number of properties we bought during the great Recession that were originally bought by people hoping to get rich.  Instead many of them lost their homes and their savings in foreclosure. 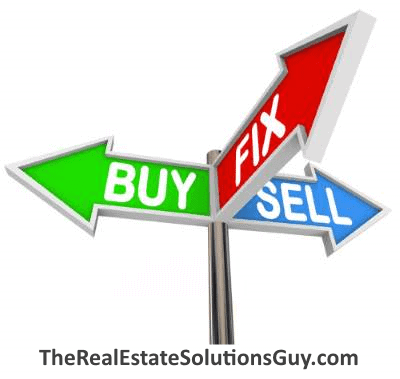 I have been a full time real estate investor for several years.  More importantly, I am fascinated by historical real estate cycles.  It has been interesting to watch the seminar cycles over these.  From the early 2000’s with the introduction of Robert Kyosaki’s “Rich Dad – Poor Dad”, the public started going crazy for real estate.  As the real estate market heated up, so did the number of speculators and real estate “investors”.  To feed the demand, the number of seminars also increased promising unrealistic success.  But then a funny thing happened.  In 2008 when the real estate market crashed, almost all of these seminars disappeared.  Why?  Was it because there wasn’t any more interest in buying real estate?  Maybe, but in reality anyone who knew anything about investing in real estate was too busy buying houses to be teaching.  When it actually makes sense to buy real estate, seminars aren’t very popular.

Flipping Houses in a Sellers’ Market

Now that it’s a sellers’ market and opportunities are hard to find, seminars are becoming popular again.  At least 2 prominent TV flipping personalities are out on the seminar circuit and have come through Sacramento in the past month.  Flip or Flop was in northern California June 7-11 pitching their Success Education Program.  However,  you may not even see the two celebs at their seminar.  Their website states that Tarek and Christina, the shows main attraction,  are not able to personally attend every event but that they have trained people to teach you their secrets  In addition, there have been at least two other HGTV  personalities in Sacramento recently pitching their seminars and education.

I’m a contrarian investor.  When my hair stylist starts talking about flipping real estate, it’s time to be cautious.  When my hair stylist doesn’t want anything to do with real estate I want to be all in.  I don’t think we’re in either situation currently, but we are definitely moving toward the former.  Is it just the prevalence of TV personalities flipping homes, or is it early signs of another bubble?  I’ll let you decide.

It’s More Than Just About Collecting Money for Seminars

Now, I have not watched the “Flip or Flop” TV series or the other flipping TV shows for that matter.  Nor have I attended any of their seminars.  I don’t know if their education provides any value or not.  What concerns me is this.  If buying, rehabbing and selling houses were as easy as some gurus say, why aren’t they flipping houses instead of selling seminars?  The reality is that it was much easier to find houses to purchase and flip during the Great Recession.  Now that we are in a sellers market, it’s harder to find good opportunities.  As a result, I believe some gurus have resorted to selling seminars in hopes of their attendees becoming bird dogs for them.  In other words, they want you to find them houses that they can flip.

Time for an Important Personal Evaluation

Don’t think you’re too smart to get hurt

One of the first Realtors I used when I got started was a successful Realtor, but not a successful investor.  One day I ask him, “Why don’t you buy investment properties?”  His response was, “Because I’ve never been able to make money at it“.  This was a dead give away that I was asking the wrong person for advice.  I needed someone who knew what it took to be successful.

One of the common signs of a market bubble is the phrase “It’s different this time”.  It was said during the Dotcom bust in 2001.  People were saying that the Internet was the wave of the future and that tech stocks weren’t going away.  It was said during the housing bubble in 2005-2006 when people said that “appreciation always happens”.  And it will be said again, only in different ways in the future.

While I don’t think poorly of people wanting to better their lives, I do object to the notion that real estate is an easy, quick get rich scheme.  Building wealth is a slow process, that takes time and effort.  Most of all, it requires being frugal and saving your money.  Before shelling out your hard earned dollars for some real estate seminar, understand that many of these gurus are appealing to our greed.  They appeal to the carnal side of us that really wants to find some secret that no one else knows that will make us rich.

Before you decide to spend your money on taking some real estate seminar, I would recommend you read John T Reed’s review of the various real estate guru’s.  John doesn’t hold back any punches and offers candid observations of many real estate guru’s.  At least if you read his observations,  then you won’t be buying a seminar blind.  He doesn’t currently have reviews for some of the newer gurus on the seminar circuit, but he will give you some good questions to ask to determine if the presenter is legitimate.

If you’re considering one of these seminars, do your homework first and leave your credit cards at home.